By deploying sustainable products on the A63 Road Improvement Scheme - Balfour Beatty has achieved a major reduction in diesel usage and CO2e emissions.

The project spans a 1.5 kilometre site in the centre of Hull (Castle Street). It see’s the conversion of a major interchange into a split level junction and introduction of a two-lane dual carriageway and two new bridges to improve safety for pedestrians and other road users.

As part of the project, Balfour Beatty aimed to bring together the latest innovative, sustainable technology as part of a continued drive to operate cleaner, quieter worksites, while driving down diesel usage, CO2e emissions and operational costs.

The electric excavators needed to be recharged each day, however, there was no mains power on site. Previously a diesel generator would have run 24/7 to provide on-site power, but this would have eliminated the environmental benefits gained by using the battery excavators.

The ProPower’s solar hybrid system - offered a clean, quiet way of charging the excavators that required no mains power. Being trailer mounted, the solar generators were also easy to deploy, easy to move around site and required little maintenance.

The case study showcases how sustainable innovations can be brought together to transform traditional worksites into cleaner and more cost efficient projects. 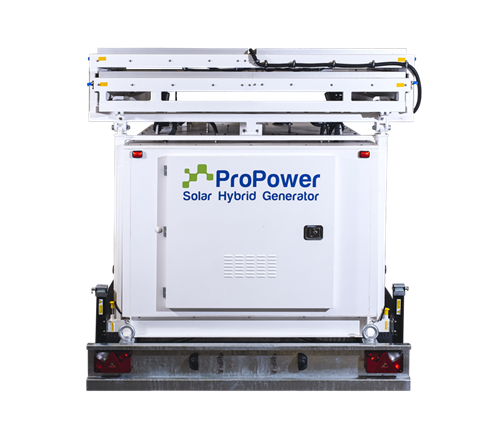