International Trade Secretary, the Rt Hon Dr Liam Fox MP, saw at first hand today how a solar technology success story, pioneered in his North Somerset constituency, is sparking a revolution in the use of mobile solar lights on UK construction and infrastructure projects.

Since developing, and proving, its digitally-enabled mobile solar lighting towers in tests with major UK construction contractors last winter, Prolectric has doubled the size of its factory in response to demand.  Prolectric’s total temporary lighting fleet is set to top 2,500 by the end of this year – a ten-fold increase since Spring 2017 and there is no sign of a let-up in production.

Earlier this year, the Highways England A14 Cambridge to Huntingdon improvement scheme – the UK’s largest highways project - became the first to switch to temporary lighting powered by sunshine in preference to diesel.

Prolectric’s managing director Chris Williams told Dr Fox: “During the past 12 months alone, Prolectric’s solar lighting fleet has save one million litres of diesel, resulting in a £800,000 operational saving and a 3,000 tonne reduction in CO2 emissions for the industry.

“Many UK contracting firms have set challenging carbon reduction targets as part of the Government’s strategy to halve construction industry carbon emissions by 2025.  Based on our current growth predictions, in three years we expect to save the UK industry more than 15,000 tonnes of CO2,” he said.

Prolectric has doubled the size of its factory to 24,000 sq m and tripled its workforce to meet anticipated demand for solar lights during the coming winter season.  Officially opening the new facility Dr Fox said:

“The phenomenal growth in popularity of Prolectric’s mobile solar lighting has been extremely impressive and is based on the company’s shrewd decision to ensure their technology is attractive to contractors for its fuel and operational savings, as well as being able to operate completely reliably throughout the night even when the winter days are shortest.

“Now, the Department for International Trade is supporting Prolectric’s plans to expand its operations into European markets, particularly Spain and France, where there is already significant interest in their clean and smart technologies.  I wish them every success for the future.”

In the vanguard of Prolectric’s digital revolution are ProLight mobile solar lighting towers, which Dr Fox saw being assembled in the factory as the company works to service its growing order book.The Prolectric ProLight is a specially-developed trailer-mounted unit with heavy-duty deep-cycle batteries, an array of four 330W solar panels, a 7.5m telescopic mast and four LED lights which are capable of 550m2 coverage at a minimum Lux level of 20, and 10,000 to 40,000 lumens.

Every ProLight is fitted with a micro-controller and tracking facility, so it can be switched on and off remotely and key data such as power generated/consumed and light on/off settings, monitored and recorded. Customers can change the settings via a specially-developed web portal to suit the light conditions, or Prolectric can provide a service on their behalf. 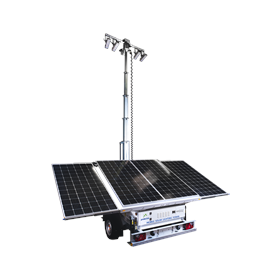 ProLight is the only mobile solar lighting tower in the UK that operates reliably all year round.